This article is about Space Debris and some information regarding the subject.  It also discusses Kesslers Syndrome – the phenomenon where debris in orbit (anything from space vehicle parts, chips of paint from launchers, small asteroids, etc) collides with other objects to form even more debris (in smaller pieces), therefore increasing the chances of further collisions and repeating this process over time.

Debris policy was first acknowledged in the late 80’s when President Reagan “called for a review on the U.S policy on space debris” Wertz et al (1999).  Whilst space debris has been recognised for many years prior to this, it was around this time that sanctions and policy began to take form and requirements for future space missions to reduce their “debris output” became critical for approval.

NASA and the DoD (Department of Defense) received a recommendation to improve the monitoring of debris, especially in the LEO (low Earth Orbit) and GEO (Geosynchronous Earth Orbit) orbital altitudes.  LEO is an area of concern due to higher velocities and material masses, whereas debris in GEO would be difficult and expensive to remove, leading to a build-up of objects in the future as more satellites make use of GEO for their mission orbits.

Wertz et al(1999) then tells us that the report concludes by “requiring preventative measures; observing and analysing present debris, avoiding collisions and minimising collision effects and future space debris.”  This policy therefore forms part of the foundation for research into safe re-entry for satellites at End-of-life and complying with space policy to minimise space debris.  In addition to this, Wertz et al (1999) also states that a mission will “get much faster approval if you minimize debris” which further gives weight to developing a solution to space debris management.

Additionally, the responsibility of space debris lies with the nation of its production.  Under the Outer Space Treaty of 1967, Wertz et al (1999) tells us that “a spacecraft or space station is its sovereign territory…Space debris falls in the same category, making clean-up politically difficult.”  Therefore, not only is it in the interest of the space environment to control space debris, but both economically and politically also.  Reduction of objects in space means less chance of it damaging or destroying another nation’s spacecraft, reducing insurance claims made as well as maintaining co-operation between countries.  This is especially important as space law also dictates that “if a project might cause harm or interference with others, international consultations must occur before it proceeds.” Wertz et al(1999). 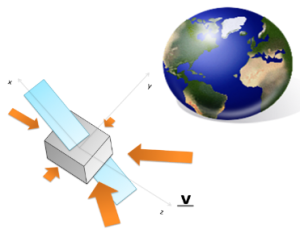 Figure 1 Reproduced diagram representing the average relative impact rates given by Wertz (1999) for a spacecraft surface. Notice how the leading edge is subject to higher velocity impact forces compared to the Earth facing side.

Wertz et al (1999) suggests that different faces of a spacecraft (assumed to be in LEO) have different impact rates.  Suggested values are 10 km/s for the leading edge (±45θ), 2 km/s for surfaces 90θ to the ram direction, 1 km/s for trailing edges, 0.1 km/s for space pointing and 0.01 km/s for Earth pointing surfaces.  Fig 1 graphically illustrates this.  Therefore, a large leading edge area of a spacecraft has not only a significantly greater chance of a debris impact, but also has more potential for damage done due to the higher velocities involved and hence kinetic energy.  In turn, this collision has its own potential to create additional debris and thus populating the space environment further with debris.    This phenomenon is known as the Kessler Syndrome, in which it is also noted that “large objects act as a source of smaller objects by fragmenting” Kessler (1985).

In his PhD research dissertation, Harkness (2006) graphically represented the number of Earth objects in orbit, as shown in Fig 2. 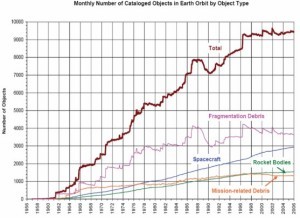 Whilst this is a very brief look into the world of space debris, the implications of Kesslers Syndrome raise many issues.  Not only does this apply to orbital debris from rockets, satellites, etc, but also to potential asteroids and other celestial bodies.  Recommendations for “blowing up” an asteroid if it is on a collision course with Earth isn’t considered feasible or practical because of the asteroid breaking up into smaller pieces, each travelling at extraordinary velocities.  If you consider that:

Then even a small asteroid travelling very fast has an enormous amount of energy and is capable of causing significant damage!  For further reading, please look up the literature listed in the Reference section.